Google announced back in May that they would be looking into building vehicles that could be operated without pedals or steering wheels and now it appears that the company has had its first success. The company has unveiled its very first control-free robot car, though it isn’t anything that most would be looking to drive and will only be available in limited quantities.

The company is still looking into the practicalities of such vehicles but, if early indications are anything to go by, they are making very quick headway.

The car is registered as street legal in California, though there are no announcements as yet in regards to legality in other areas of the United States or in international territories, and will be the first of one hundred that are planned for production. The vehicle is set for its debut next month, with the UK being earmarked as a destination for some of them, which indicates that the company are either confident that it will be deemed road legal over here or that there are people who would want to purchase one for the collector’s value.

The Google Self-Driving Car Project team blogged about their success, stating: “Today we’re unwrapping the best holiday gift we could’ve imagined: the first real build of our self-driving vehicle prototype. We’re going to be spending the holidays zipping around our test track, and we hope to see you on the streets of Northern California in the New Year.” 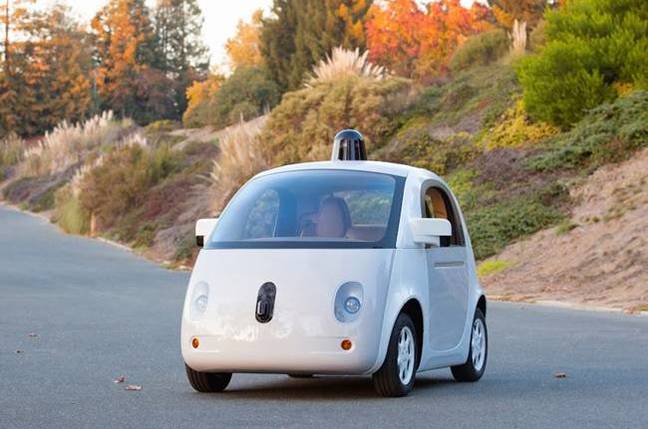 The vehicle, which is still in the prototype stages, looks extremely similar to the early prototype that accompanied the production announcement back in May, which indicates that the team must have had a good idea about the direction they were looking to take the design in.

It features a sensor array on the roof that bears more than a slight resemblance to a bubble, with further tech wizardry packaged at the front of the vehicle. Beyond that it has to be said that the design looks a little less than solid, though considering this is a first attempt at something that may take driving far beyond what it is currently this isn’t something we will be holding against them! After all, the team has already logged an astonishing 700,000 miles of driverless road use since announcing the development of their prototype.

For those who are a little nervy about just how good the robotic controls are, Google has also equipped the vehicle with manual controls just in case. Furthermore, the company has been working on the concept for more than a decade following the Defense Advanced Research Projects Agency (DARPA) making a challenge to any team who could create a driverless vehicle that could traverse a 150 mile stretch of desert.

Since those early days the idea has grown enormously and many of the people who entered that initial challenge are now working with Google on the car. There are likely still barriers that will need to be crossed and Google may well have to make optional manual controls the standard rather than the temporary measure they are now, but it appears we are edging ever closer to the next evolution in driving.

Let's Get In Touch

Let’s chat about how we can help you. Fill in the details and we’ll get back to you as soon we can.

How To Reach Us

Our helpline is always open to receive any enquiry or feedback. Please feel free to contact us via email or use the form and we will get back to you as soon as we can.